Toronto-Dominion, or TD Bank, was nominated the 19th safest bank globally by Global Finance, one step above RBC and the safest bank in North America.

In fact, all three remaining in the big five were ranked higher than the first US bank on the list (35: AgriBank).

This is an endorsement (one of many) regarding the safety and stability of the Canadian banks, especially the big two.

However, that doesn’t mean safety is the only thing you get by investing in TD Bank stock. The second-largest bank in the country is a powerful long-term holding. 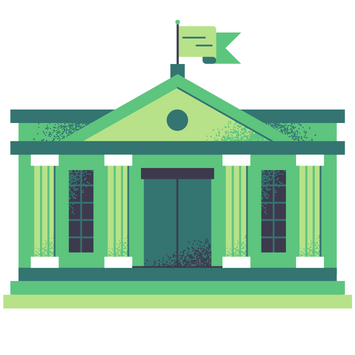 TD is a powerful bank with an impressive footprint and a stock that reflects this stability and dominance via top-tier growth and dividends in the sector.

TD Bank stock is an excellent long-term investment for a number of reasons, and to understand them all, we have to dive down into some specifics.

TD Bank, or more accurately, one of the two banks that merged into TD, i.e., Bank of Toronto, was established in 1855 (by grain merchants and millers). The second half – Dominion Bank, was founded in 1867.

Toronto Bank was issued a charter by the parliament in 1869. After years of growth, then a period of stagnation (World Wars, Great Depression), the banks officially merged into what we now called Toronto Dominion in 1955.

The collective entity had 499 branches and an international presence.

It saw impressive international expansion and a wave of acquisitions in the last three decades, including Canada Trust in 2000.

It became the seventh-largest bank in North America (by the number of branches) in 2008 and sold TD Ameritrade in 2020 to Charles Schwab.

Toronto-Dominion is a giant. It has been the second-largest Canadian bank (by market cap) for some time.

So even among the big five, it’s the only serious competitor to RBC and a potential candidate for the top spot.

It’s the number one bank in Canada in multiple categories, including:

However, as digital banking becomes the norm, the brick-and-mortar model might shift, but since TD has a clear edge when it comes to digital users, it may suffer less than other Canadian banks from this change.

Another main difference between TD and other Canadian banks is the US exposure. The US retail earnings usually make up a more significant portion than any other bank in Canada.

TD Bank stock is relatively safe, and this safety comes from more than just the sector’s stability.

The Canadian Fed/Bank of Canada runs a tight ship and prevents Canadian banks from making the mistakes US banks made preceding the great recession.

And while it’s not a perfect system, it makes TD a solid holding from a safety perspective. Its leadership role in the sector is also in its favour. The finances, so far, have also remained relatively stable.

When you are considering a banking stock like TD bank stock, a few metrics to check out are:

Valuation Ratios (Price-to-Earnings and Price-to-Book): In banking stocks, the two most commonly-used valuation ratios also offer insight into the growth potential of the banks. Slightly higher than the average ratios might indicate high expected growth.

Capital Ratios: One of the best metrics to objectively evaluate a bank’s risk profile is its capital ratio (Total capital divided by risk-weighted assets). TD usually has a very healthy capital ratio.

Payout Ratio: This dividend-specific ratio is essential to determine whether TD is keeping up with an ideally sustainable range of 40% to 50%. If it’s consistently higher, it may impact dividend growth.

TD has been paying dividends for well over a century like most other Canadian banks.

However, in recent history, it has only been raising its payouts for about 11 years, still making it an aristocrat.

Between 2012 and 2022, the bank raised its payouts by roughly 145%. And its payout ratio crossed the 50% threshold only twice in the last decade.

Its dividends are safe and growing at a decent pace. If the bank can keep this up and you lock in a decent yield, its dividends alone might be reason enough to buy and hold this stock for decades.

If we consider the price performance of the last decade, it sits squarely in the third position, just a few percentage points behind RBC.

The stock price grew roughly 128% in the decade between 2012 and 2022. And the overall returns for that period (including dividends) were about 234%.

Even if we discard the unusual patterns in the last six years, i.e., a period of stagnation between mid-2017 and early 2020 followed by rapid post-pandemic growth, the bank’s potential to double its capital in a decade is quite strong.

Following the rapid post-pandemic ascend, the bank entered a steady correction phase which is still underway. Assuming it will last till the last quarter of the year and will push the stock quite close to the pre-pandemic peak.

Then the stock might start growing at a modest pace of about 10% a year. This puts the estimate at around $100 and $110 per share.

Depending on your approach, you can find several alternatives and competitors to the TD bank, but there are a few that stand out.

The most natural competitor and alternative to the TD Bank is the leader itself.

RBC usually offers a very similar combination of growth potential and dividend yield to TD, and as long-term holdings, the overall return potential of the two is eerily similar.

However, considering its digital adaption and how rapidly it’s gaining on the larger bank, TD might have a slight edge.

When it comes to capital appreciation potential, the National Bank of Canada tops the charts, despite being the smallest in the big six.

But the difference is not that great, and despite offering better growth potential, there is a negligible difference between TD’s and National Bank of Canada’s yield. However, there is no comparison of size and scale.

National Bank is an incredibly local bank, and even its Canadian footprint is nowhere near as large or diverse as TD’s.

It also lacks product diversification and a digital presence. But the dividends are equally stable, and the dividend growth rate of both is quite similar.

Ans.: TD Bank is a Canadian Bank with an impressive US footprint and presence.

Ans.: Based on historical performance, RBC has a slight edge over TD Bank. However, if you are planning on holding it for the next two or three decades, TD might offer slightly better returns.

How To Buy TD Bank Stock In Canada

TD Bank is more than just a safe dividend investment. As a long-term holding, the TD Bank stock can offer you powerful overall returns with a combination of healthy capital appreciation and constantly increasing dividends.

It has proven its mettle in multiple financial crises and hopefully will continue to do so in the future.

TD Bank stock gets a Wealthawesome’s thumbs up as a long-term holding.